What does the STATUS of a prospect mean?

You have probably seen the STATUS somewhere in Woodpecker. Each and every prospect in Woodpecker has some status value assigned to them.

This is why when you check the status of some prospect it sometimes has one value on the main prospect list (Prospects), and another in the campaign(s) that they are included in. The status in the main list depends on several things and is difficult to break down if the prospect has been contacted multiple times. The status in a campaign is a simpler story.

Learn how to bulk change the status »

Let’s look at every STATUS which you can find in Woodpecker:

This is the starting point. Every prospect is given this status right after being added to Woodpecker. In a campaign, this status means that the prospect either hasn’t been contacted yet or hasn’t yet replied.

This status is assigned automatically when Woodpecker registers a response to a campaign from another email address (which doesn’t belong to your prospect yet may share the same domain). This new email is then added to the main prospect list (Prospects) with the #SECONDARYEMAIL tag and status BLACKLISTED. (Not sure what the #SECONDARYEMAIL tag means? You’ll find out here).

Status BLACKLISTED can only be changed back manually.

When a prospect replies, their status changes to RESPONDED and is counted as such in statistics. You’ll see this status in the campaign as well as in the Prospects database.

This is a local status which means that you can find it on the campaign level. Woodpecker validates an email address every time you’re trying to send a message. If something is invalid now, it doesn’t mean it will be invalid forever. This status is then assigned when the prospect’s email address is found to be non-existent. This procedure is not bulletproof, but it will detect most of the invalid addresses before any emails are sent to them. This is possible thanks to our native integration with Bouncer.

If the email sent to a prospect gets bounced (cannot be delivered), this prospect is automatically assigned the status BOUNCED. If you notice that you receive a lot of bounced messages, you may be experiencing deliverability issues and your messages may be landing in SPAM. Check your Inbox to learn the reason why your emails are being bounced. 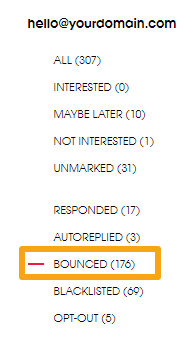 This status is assigned only in a campaign and does not propagate to the main Prospects database. If you want to mark the prospect as BOUNCED in there, you have to do it manually.

This status is automatically given to a prospect who:

Prospects previously marked with the #UNSUBSCRIBED tag now will be also assigned the status OPT-OUT. Use this status when your prospects ask you to remove them from your mailing list to ensure that you won’t contact them again. Status OPT-OUT can be changed back to ACTIVE only manually.

When set in a campaign, this status will automatically change in the main Prospects database and will be transferred to the new campaign if you add a prospect with it set. However, when you change the status from OPT-OUT to another in the main database, it won’t propagate to the prospect in a campaign (the exception to this rule is the BLACKLISTED status).

We do our best to recognize most autoresponders. When Woodpecker detects an autoresponder (out-of-office reply), the status of the prospect is changed to AUTOREPLIED locally.

When you receive the autoresponder, that prospect will appear in the column To Check in that particular campaign. Click To Check and you’ll be redirected to the category AUTOREPLY. If you wish to continue sending, choose the date to resume. Here, you can also change the prospect’s status by clicking the dropdown.

This is the local status and can be found only in the campaign. It means that sending to a prospect has been paused, obviously. If your prospect is assigned the status PAUSED, you’ll see a little dot next to the tab To Check and corresponding category/categories (Missing Snippet, Autoreply, Other Campaign, Secondary Reply, Manual.)

There are four situations in which a prospect can be marked as PAUSED:

Sometimes it can happen that your prospect will be put into a couple of categories at once. Make sure you change their statuses in all categories to ACTIVE (and fill in the missing snippet, for example) to continue sending emails.

We assign this status in the campaign to prospects that were deleted from Woodpecker yet you had contacted them before. When you remove your prospect’s address from the Prospects database, you will still find them in the campaigns they were added to with the status REMOVED. We keep these prospects in your campaign to make sure your statistics are correct.

This is a local status which means that it exists only within a campaign. Your prospects are automatically marked as NONRESPONSIVE when they don’t respond to you within the time you set for a particular campaign. Learn more »