IN THIS ARTICLE: 1. How does it work 2. Available actions Suppose you are familiar with Zapier or other API aggregators. In that case, you know about setting up automatic actions there, e.g. “If prospect in…

Suppose you are familiar with Zapier or other API aggregators. In that case, you know about setting up automatic actions there, e.g. “If prospect in Woodpecker is marked as interested, then create a deal in Pipedrive”. From now on, you are able to automate the processes directly in a native integration between Pipedrive and Woodpecker, thanks to automatic actions.

How does it work?

You’re good to go when you have the Pipedrive integration set up in Woodpecker. Head to the Marketplace → Pipedrive → Actions subtab and start creating the automated action there by clicking on the “ADD ACTION” button.

Start with naming the action. It can be just your name, or if you plan to create more, you can add a campaign name to it. The next thing is to select the type of operation to be performed. 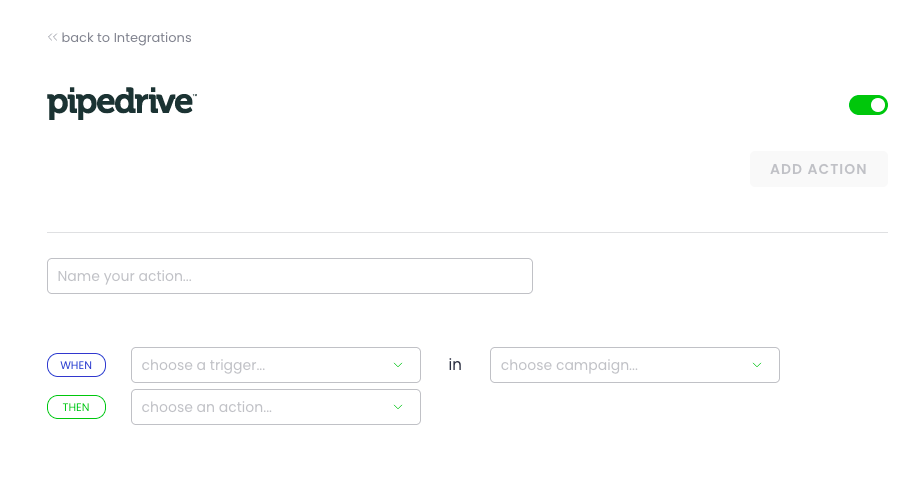 Next to the “WHEN” icon, choose the trigger from the dropdown list. You’ll have two options here: “Prospect is marked as interested” and “Prospect replied”.

Once you choose the appropriate one, select the name of the campaign in which the action should be performed.

Although for now, it is only possible to create a deal in Pipedrive, you still have to set it up in the settings of the individual action, just next to the “THEN” icon.

If there is an action you would like to see added, let us know at [email protected]. Feedback from our customers is always greatly appreciated!

After setting everything up, don’t forget to save your action configuration. Once the action is enabled, activity tracking for Prospects begins. Prospects marked as “Interested” or “Responded” when the action was inactive (whether before setting it up or by stopping it) will not be added to Pipedrive.

To disable an action, click on the switch next to its name. By doing this, data synchronization stops, but the configuration remains the same. Keep in mind that completely pausing the Pipedrive integration also affects the action.

Once you save and run the action, you will not be able to edit it – the only option to change something is to delete it and add it again.

This feature allows you to add more than one action, e.g. if you want to match one trigger to one campaign. To avoid confusion, make sure that the name of the action stands out – it could be a combination of your name and the name of the campaign.

If you have set a lot of actions, you can display them all by clicking on the “show more” link.