How to set up workflows in a campaign?

IN THIS ARTICLE: What are workflows? Setup in Woodpecker’s campaign Importing a list of prospects Case scenarios FAQ What…

Most of the campaigns are part of a certain workflow in your company. The shape of the workflow can be different, depending on what data is essential to you, based on whether your prospects replied to your message. If you ever had to design such a workflow for dealing with prospects, you know it is often time-consuming.

With the workflows feature, you can set rules for moving prospects to subsequent campaigns, and it all can be done automatically by Woodpecker. The transfer rule can be based on the prospect’s achievement of a given status and, optionally, level of interest.

This setup eliminates the need for external integration to automate business processes and allows the entire procedure to be managed in a single tool: Woodpecker. Prospects who meet the set criteria will be immediately transferred to another campaign.

Right when you create a campaign, you’ll see the option to set up a workflow. It’s based on prospects’ status and their interest level only, but you can create a few workflows in one campaign – with some limitations, which will be explained later in this article.

The first thing you choose is the prospect status from the list of four possible: Responded, Autoreplied, Paused manually, and Nonresponsive.

As for the Interest level, the option to choose it appears only after selecting the “Responded” criteria. You’ll be able to select from the list of interest levels you know from Woodpecker, and the “Leave empty” one.

After selecting the desired criteria for potential customers, you can choose the campaign to which they should be copied. The list includes all the campaigns visible on your account (so without the deleted ones), along with the status icon next to their name.

If you decide on copying the prospects to the campaign that’s been already completed, it will automatically start after some new contacts have been added to it. Workflows operate for campaigns that are Running and Completed – you can safely set up workflows for campaigns that are in draft or paused and no action will be taken until you start your campaign.

The maximum number of combinations is 7, but it may decrease due to limits in the choice of rules. You won’t be able to choose the same configuration for prospects to go to different campaigns simultaneously, as it will only overlap while transferring prospects. Similarly, if you select “Leave empty” in one of the workflows, it is better not to select individual Interest levels, as this may result in duplicate actions for some prospects.

If you’re wondering how to check if a campaign has a workflow set up, you’ll be able to see it right away from the Campaigns tab view. For more information on what the specific workflow does, you’ll have to enter the campaign edit mode.

A workflow will actively work only in a campaign with a Running or Completed status.

When uploading the same list of prospects (duplicates) to a campaign, there may be a situation where the statuses of some prospects affect the operation of workflows.

More specifically, let’s say your campaign with a set workflow is running, and prospects have been assigned one status that matches the workflow configuration. If you decide to import the list of the same prospects with a different status than the one in Woodpecker, a workflow won’t be triggered. Woodpecker workflows operate only for automatic change of status for example response from a prospect, manual change, or change via API. Woodpecker workflows are not triggered by the change of status made via upload of file with prospects data.

#1 Changing the status of a prospect

You’ve set up two workflows in Campaign #1. The configuration is as follows:

After some time that the campaign has been running, some prospects that replied to your emails in Campaign #1 might have already been copied to Campaign #2 and received other messages from its flow. If you decide to change their status to “Paused (manual)” in Campaign #1, and you have a workflow based on this status, the action for such a prospect will be executed again.

You’ve set up two workflows in Campaign #1. The configuration is as follows:

In a situation where you have a response from a prospect that clearly does not indicate the level of interest in your message, the Interest level will not be assigned to them by the Woodpecker AI. So this leaves the prospect with a status of “Responded” and an empty IL state, which matches your first workflow. The action for such a prospect will execute – it will be moved to Campaign #2.

However, after a while, you may find that you want to review the responses from prospects and sort them by interest, thus assigning “smiley faces”. If you mark the same prospect, who has already been moved to Campaign #2 as “Interested,” they will match the second workflow, so the action will be performed again, thus adding them to Campaign #3.

The matter gets a bit more complicated if Campaigns #2 and #3 were specifically to differentiate between prospects, and by duplicating the execution of the action for the same prospect, it loses its meaning.

Q.: What happens if I have a workflow in campaign A, where prospects go to campaign B, and I decide to delete campaign B?

In such a case, when deleting a campaign B, a pop-up will appear informing you that you need to delete a workflow before deleting the campaign connected to it. 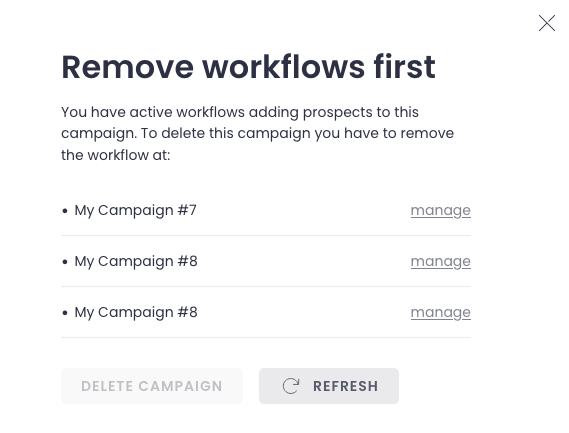 You’ll be able to click on the link which takes you to campaign A, where you can remove a specific workflow. To indicate which specific workflow the App is referring to, you will see a red icon to the left of the setting in question.

After clicking on the “Refresh” button, you should see the information on a workflow deleted. 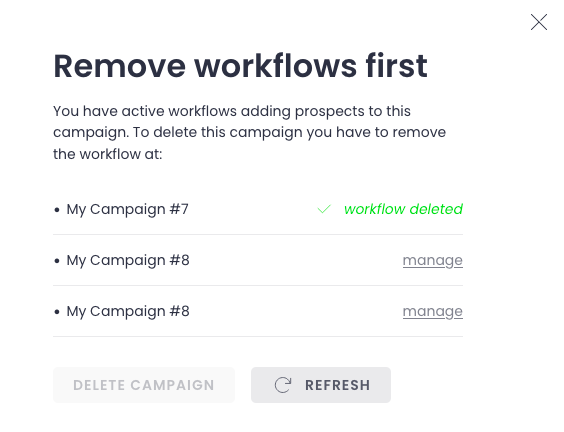 Q.: Will prospects that are already in my old campaign be moved after creating a workflow?

No, they won’t be copied to another campaign.

Q.: Will I be able to see if a prospect has been copied from another campaign?

Unfortunately, information about the prospect’s path from one campaign to another will not be visible.