You can contact non-responsive prospects by importing them to a new campaign, or updating the old one. Learn how to do it from this article.

When some prospects won’t respond or even open your first email in the campaign, you might be wondering about another way to contact them again. This article will give you two quick workarounds in which you could do it in Woodpecker.

To start, choose the campaign that you want to export the prospects from. Navigate to the Prospects tab in the Campaign. Here, you can filter your prospects with the “Opens” and “Status” filters.

For the first filter, choose “Opens: 0”. Keep in mind that you should only use this filter when you are sure that you had the Open tracking enabled and that these prospects did not open your emails.

If your campaign is completed, you can use the “Status” filter by choosing the “Nonresponsive” status from the drop-down list.

When your list of prospects is filtered, you can move on to selecting them by check-marking the box at the top of the table on the left. 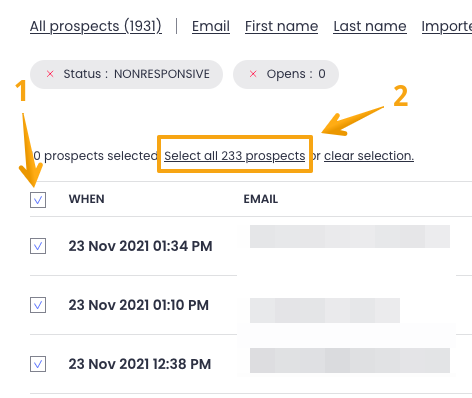 After you’ve done that, an “Actions” button should appear, and by clicking on it, you will be able to export the prospects to a .CSV file.

With the exported file, you can start creating the campaign. If you’d like, you can always make a copy of the one you exported prospects from and it will be automatically created in Woodpecker.

Add the prospects by importing the file. Proceed with this process as you would with adding duplicates »

At the end of this operation, you will receive a message about some prospects being already contacted – choose to include them in this campaign and click on the “Add” button.

Adding steps to a campaign

If you have a campaign with less than 12 steps in it, you can add more emails to the sending sequence. The campaign will start from the new step and that way you will be able to contact the prospects that never replied to you.

After you’ve updated the campaign and started it, those prospects with a “Nonresponsive” status will be automatically assigned the “Active” status. If it won’t change by itself, you can always do that manually.